A geopolitical perspective on investment 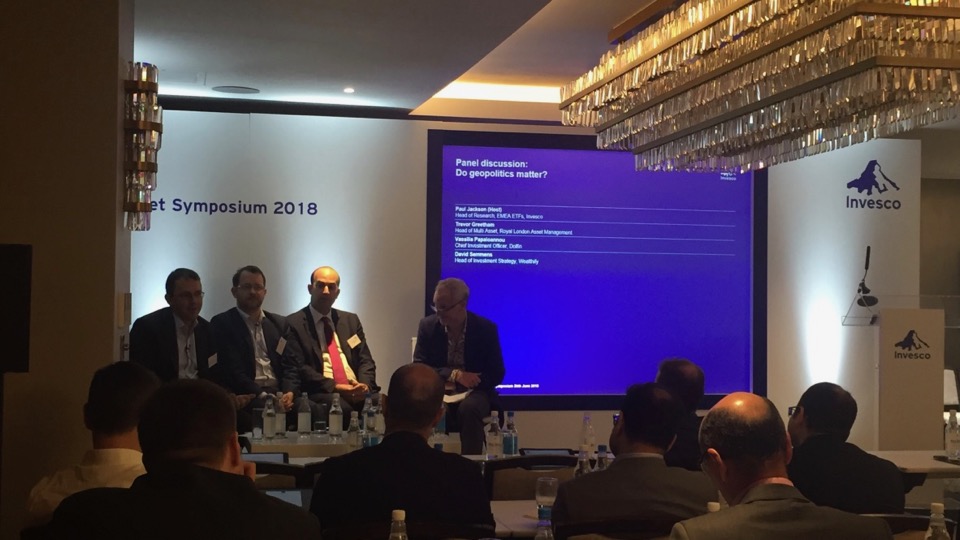 How might geopolitics impact your investment returns? It’s a weighty question, touching on many of today’s hot-button issues including upcoming elections, populism, nationalism and the end of multilateralism, and the risk of military conflict. In his introductory remarks to delegates at the Invesco Powershares Multi-Asset Symposium on 20 June, Paul Jackson, Invesco’s Head of Multi-Asset Research, examined these factors.

He began by assessing a number of global trends and the risks they present. First, global population growth is outstripping working population growth, and while food production is increasing at a rate what will allow the world’s population to feed itself, the slow-down in the rate of population growth could put the brakes on economic growth.

“By 2100, in many places, every working person will be supporting another who is not working,” he said. “This will continue to increase stress on the global economy.”

Second, he examined the issue of deficit imbalances and trade wars, saying: “If we think of running a budget surplus as a crime, Switzerland, Germany and the Netherlands are among the most egregious offenders. We are conditioned to think of trade wars – but are they in fact debt wars? These are two sides of the same coin.”

Jackson then touched on the issue of rising inequality, which leads to divided societies and a surge in populism. “We find inequality not only in emerging countries, but also in the US, where it keeps getting worse. The US and China are very close in terms of inequality. Yet populism is rising in more equal societies, such as Italy and the Netherlands,” he said, going on to point out that consequences of inequality include not only populist votes, but also international tensions, trade wars and, ultimately, the threat of military conflict.

The final part of Jackson’s opening address looked at this ultimate threat, and the effect it could have on equities markets, noting that while war is not a necessary condition for a bear market, it seems to be sufficient.

On this sobering note, he introduced the panel, on which Papaioannou was joined by Trevor Greetham, Head of Multi Asset at Royal London Asset Management, and David Semmens, Head of Investment Strategy, Wealthify, and began by asking a seemingly simple question: do geopolitics matter in investment?

First to respond, Greetham said that asset managers can do three things to mitigate geopolitical risks: factor them into their calculations; be ready to react to shocks; or hold a diversified portfolio.

Semmens responded: “We need to be aware of what is likely to happen, in order not to be taken by surprise. You may not be an expert but there are lots of experts out there who can tell you what they think.”

“Geopolitics matter because they influence asset behaviour across asset classes,” was Papaioannou’s answer. “You need to look through the implications of events and position your portfolio accordingly.”

Beware of the bear

The panel then went on to discuss the likelihood of a bear market starting in 2018, before being asked whether geopolitics should always be regarded as a risk.

“There are more opportunities than risks,” Papaioannou responded. “Populism, for example, has to be perceived from the angle of whether it is pro- or anti-business. Will capitalism prevail? The current tensions between China and US, for example, are not about trade but about intellectual property and who has the upper hand in the digital era.”

Semmens agreed that global instability does not necessarily equal bad news for investors. “What makes people feel glum around the dinner table isn’t necessarily bad for the markets,” he said.

Discussion then returned to the UK, Brexit and the prospect of a Corbyn-led government. This, Papaioannou said, is a real possibility. “We need to look at politics and the markets together,” he said. “If Corbyn moved towards a more sensible Brexit, that would be good. But in terms of his other policies, the question is now much damage they could do.”

“Corbyn’s shadow cabinet’s strategy is to let Brexit happen and be a mess,” was Greetham’s outspoken view. “He’s staying marginally more on the ‘remain’ side than May. But Brexit is still an open playing field. There could be a chaotic, no-deal Brexit, which would cause the pound to lurch downwards and damage the economy. The more likely a no-deal outcome becomes, the greater the chance of parliamentary rebellion.”

Continuing on from these nightmare scenarios, the panel were asked what specific threats keep them up at night.

Semmens said: “I sleep well! But something could happen that was unknown and unexpected. Aside from the lack of progress on Brexit, these ‘unknown unknowns’ are my main concern.”

Greetham’s rest is disturbed by the prospect of seismic events taking the markets by surprise, as was the case in 1914. “The markets didn’t have a clue what was going on,” he said. “A minor archduke was assassinated – and then the markets were closed and didn’t reopen for five years. And we didn’t predict Trump or Brexit.”

On a more sanguine note, Papaioannou said: “You can’t factor in black swan events, but you do need to have risk guidelines in place. Geopolitical risk is always part of our lives. But the US mid-term elections could be a tipping point.”

After the conclusion of the panel discussion, delegates moved into breakout sessions discussing more granular considerations for asset managers, which included fintech, multi-factor investing, and the myth of passive management in exchange-traded funds. Networking over drinks and canapés concluded a highly instructive afternoon.