A place in the sun

Malta is becoming an increasingly attractive destination for investment funds, as a recent Dolfin briefing revealed 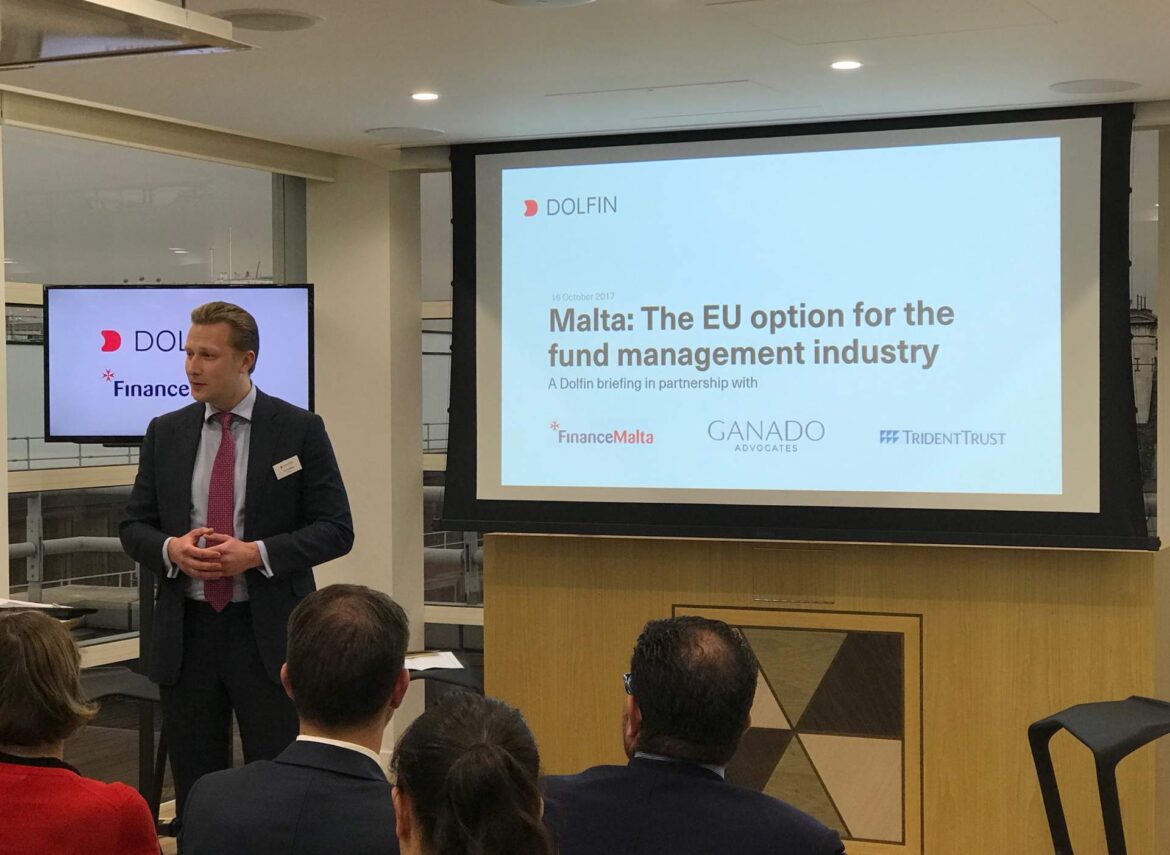 On 16 October, Dolfin hosted some of our key clients and media contacts at a briefing to discuss the potential of Malta as a jurisdiction for fund management in the EU. On the same day, Storm Ophelia carried dust from the Sahara Desert over London on its way to landfall in Ireland, shrouding the city in a gloomy orange twilight and making the golden beaches and blue skies of the Mediterranean island an attractive option for other reasons too, as Dolfin CEO Denis Nagy pointed out.

“We believe in Malta,” Nagy told delegates. “We have had a presence on the island since 2016 and are enormously impressed with the productivity and openness we have experienced there. Its proximity to the UK and robust legal environment make Malta a focus for asset managers, and we are optimistic about its future.”

Ivan Grech, Head of Business Development at FinanceMalta, a public-private initiative that promotes the island as an international finance centre, set out the benefits it offers to the financial services industry in more detail.

“There are key investment opportunities in financial services in Malta,” he said. “It is a strategic hub with high growth and low unemployment, and has a stable sovereign rating. Malta’s financial services industry has been growing since 1988, when it first became an offshore destination. It then overhauled to onshore, and after we joined the single currency in 2008, it really took off. There are currently 10,000 people employed in the financial services sector, and we are very much in labour import mode.”

For asset managers, the jurisdiction offers significant advantages. Various structures and products are offered, and innovative solutions can be found that allow funds to launch swiftly and nimbly: the time to market for a notified alternative investment fund can be as little as 10 days, faster than any other jurisdiction. The workforce is highly educated, and all legislation is published in English as well as Maltese, which offers fund managers clarity and peace of mind – as does the island’s political and economic stability.

The Mediterranean location is another drawcard, Grech said. “There are nine daily flights between London and Luqa, and once you arrive on the island there are 7,000 years of history to be experienced, so a lot to see and do. Although our legal framework and administrative track record is very similar to Britain’s, our cuisine draws on our proximity to Italy. It’s fortunate that it is not the other way around!”

Malta’s Banking Act allows for the setting up of credit institutions that are able to passport their services cross-border in Europe. Online banking and other operations may also be set up, including lending, financial leasing and venture or risk capital; e-money transmission services; trading in money market instruments; and underwriting and participating in share issues. Currently, the island is home to 167 investment services licencees, 663 investment funds, €10.9bn in assets, 27 fund administrators and eight custodians. This, coupled with the country’s low-tax regime, makes Malta a highly attractive destination for high-net-worth individuals.

Currently, however, none of those eight custody licences is held by a London-based firm. Dolfin is setting out to change this, as Ramon Bondin, Malta-based Project Manager for Dolfin, explained. “What we are doing is adding another entity to the group, which will be based in Malta and carry out brokerage and depositary services for our clients,” he told Dolfin Diary. “By leveraging our operational set-up and the huge investment we have made in technology in London, we will be able to bridge a gap when it comes to investments that might be considered complex in Malta but are bread and butter here in London.”

Bondin pointed out that of the custodians operating in Malta, none are big names. “It’s a chicken and egg situation: the big funds won’t come to Malta because there are no big custodians, and the big custodians won’t come because there are no big funds. Dolfin is not a big custodian, but we can offer access to our large sub-custody network we have thanks to our base in London, and that will set us apart from the other players that are currently operating on the island,” he said.

“Malta is an attractive, up-and-coming jurisdiction for funds. It’s been gaining traction in recent years, and there are already more than 600 funds based there. And the more custody options there are, the more funds will choose it; if you’re considering setting up a fund in Malta and you don’t have a wide choice of depository service providers, then you might opt for Dublin or Luxembourg instead. If a hedge fund were to establish in Malta, dealing in derivatives and other complex instruments, the depositories currently based on the island might shy away from it because they don’t have the technology and the systems in place. So the fund would be unable to take advantage of the competitive advantage Malta offers in terms of cost.”

Dolfin’s goal is to become the only London-based operation to offer depository services in Malta from early 2018. Long-term, having an operation that is based in Europe makes strategic sense for Dolfin and for our clients.