Delegates at Spear’s annual ‘£1 Billion Meeting of Minds’ gathered in central London last month to hear an impressive line-up of speakers offer their perspectives on the factors shaping the world of high-net-worth clients. There were warnings but also ideas and optimism aplenty. Andrew Carrier, Dolfin’s CMO, reports. 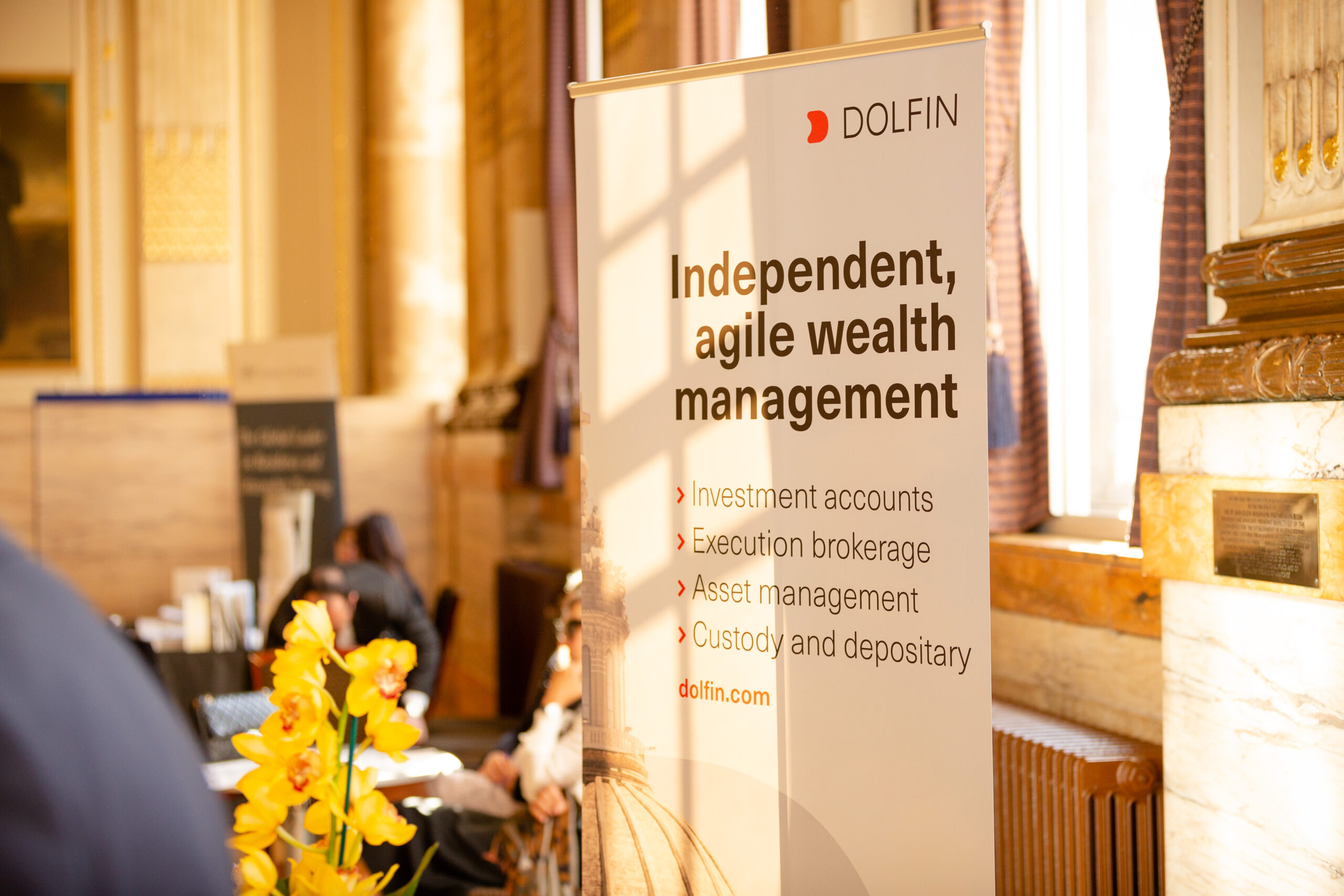 As she opened the conference, Stephanie Flanders, head of Bloomberg Economics, contended that the overall state of the world economy was broadly positive. She then, however, cautioned her audience about the pitfalls of Trump’s trade war, emerging market corporate debt, and the brewing Italian crisis. According to Flanders, one of the biggest factors driving the future will be how the gap between politics and economics gets breached. “We still don’t have a policy to deal with this backlash we’re seeing against capitalism,” she said. “The feeling that capitalism isn’t delivering for the majority of people is already having a major impact on politics.”

“We still don’t have a policy to deal with this backlash we’re seeing against capitalism,” says @MyStephanomics “The feeling that capitalism isn’t delivering for the majority is already having major impact in politics.” #WIF18 pic.twitter.com/NfFKLjMgej

Her insights proved the perfect backdrop to a day-long discussion that spanned, politics, economics, citizenship and technology as speakers and delegates alike grappled with what ‘the future of wealth’ is likely to look like.

Citizens of the world

The first panel of the day considered HNW global citizenship. What are HNWs looking for when it comes to deciding where to settle? Security, the rule of law and good quality schools, agreed the panellists – with Payne Hicks Beach immigration lawyer Katherine Bradbury suggesting that Brexit has had little impact on the decision-making process since “2017 and 2018 has seen in increase in HNWs relocating to the UK.”

Of course, the UK is far from the only country offering ‘citizenship by investment’ schemes; many are doing it. “They see the economic benefits they create,” noted Henley and Partners’ Irina Curbelo. “The key is the amount of due diligence that goes into each one.”

“In 2017 and 2018 we’re seeing an increase in HNWs relocating to the UK,” says Kathryn Bradbury. “#Brexit doesn’t seem to concern them.” #WIF18 pic.twitter.com/91B9InmjIe

Przemyslaw Koger from Alter Domus – who just the day before spoke at Dolfin’s own briefing on the subject – was keen to promote Malta’s programme. “The industry is booming; there are lots of applications,” he said.” Countries like Cyprus and Malta are small islands, densely populated. Citizenship by investment programmes are important to them.” Curbelo was positive too saying that “the Malta programme is the gold standard of citizenship by investment programmes.”

The ideal advice today, given Brexit, suggested Koger was to “secure a UK passport and at least one more.”

If citizenship felt important to the audience as Robert Amsterdam took to the stage, it must have felt like the least of their worries by the time he concluded. In a impassioned, whirlwind tour of today’s geopolitical landscape, Amsterdam struck a solemn tone, warning the audience that HNWs are facing “the highest point of risk” for their individual investments.

“In Eastern Europe, we are seeing the criminalisation of wealth,” says @robertamsterdam. “The idea that you can attack wealth with impunity and get away with it is one of the biggest threats.” #WIF18 pic.twitter.com/RWoNk30dQO

Amsterdam laid much of the blame for that risk at the feet of the US administration. “The US is leading the world in deinstitutionalisation,” he said. Echoing Flanders’ concerns, he suggested that “Trump’s policy of going it alone means we have thrown out the rules.” Offering the current US/China trade way as an example, Amsterdam suggested that the US doesn’t care about tariffs but, rather, is trying to change the terms of trade – and he thinks no one should bet against the administration succeeding.

He went on to bemoan what he called the “criminalisation of wealth” around the world. “The idea that you can attack wealth with impunity and get away with it is one of the biggest threats.”

With the scene of increased regulation, unpredictable politics, combined with economic pressures firmly set, it was left to the Dolfin-sponsored panel on ‘how technology will help humans reimaging wealth management’ to take the audience to a brighter future. Introducing the session, Dolfin CEO Denis Nagy was unequivocal: “Technology will make processes within wealth management scalable while meeting the new expectations of clients”.

To Georgios Ercan, Head of Sales at Dolfin, those expectations have in part been driven by new regulation and global tax reform. “Clients want efficiency, security, and reliability,” he said.

How to deliver that? “For clients, transparency is key; they don’t want jargon,” said Cordelia Bowdery, Investment Manager at Veritas, while Giles Keating, Managing Director at Werthstein declared that they “want to get away from the excess costs created by fund and invest directly in underlying stocks. We want investing to be more fun.”

“Clients raised on @Uber and @Airbnb expect that kind of simplicity and convenience from their wealth manager,” says @GeorgiosAE. #WIF18 pic.twitter.com/hQjihqga2k

All agreed that performance is critical. The solution offered by eToro Managing Director Iqbal Gandham was to change the very business model of wealth management. “We need to combine flat fee charging with a percentage of AUM,” he said.

Ercan felt that performance, while fundamental, is just one part of the solution for investors who increasingly want a ‘bionic’ combination of expertise augmented by technology. “Clients raised on Uber and Airbnb expect that kind of simplicity and convenience from their wealth manager,” he asserted. “But when there are concerns about the market, you have to be there in person, you have to be open and honest.”

Brexit was the first ball Marsh bowled but his panel was keen to bat it away. “There are lots of things that attract people to the UK. Most of them won’t change after Brexit,” said Leggett. “At the Brexit referendum, we voted to be poorer. The only question now is how much,” offered Barnard.

O’Neil segued like a consummate politician. “I don’t think Brexit is the biggest threat to the UK economy,” he said. For O’Neil, the main problems facing the UK are the 20 per cent in ‘lost’ productivity over the last decide, coinciding with profound generational inequality and regional inequality.

One of O’Neill’s complaints was the way big corporates distort the investment landscape. “The single biggest buyers of equities over the last 15 years have been companies themselves,” he said “It’s sort of gaming the system.”

“The single biggest buyers of equities over the last 15 years have been companies themselves. It’s sort of gaming the system,” says Jim O’Neill. #WIF18 pic.twitter.com/EpgeOwa5jZ

The panel agreed that addressing inequality is increasingly on the minds of investors. “A lot more people are talking to me about fairness,” said Barnard “It’s generational.” He went on to talk about the rise of impact investment and ESG funds among millennial investors especially, saying that he could see a future where ‘100 per cent of investments are sustainable’.

“There’s $1 trillion being transferred every year from one generation to the next,” says Denis Nagy “Younger people want more meaning in general in how they live and how they #invest.” #WIF18 pic.twitter.com/7GQncx5VoJ

Indeed, this was reflected in Nagy’s remarks who confirmed that sustainable investing is a major trend. While noting that “$1 trillion is being transferred every year form one generation to the next,” he made the point that those young people want “more meaning in general in how they live and how they invest.”

O’Neill agreed with Nagy. “Profit with purpose”, as he put it, has a fundamental part to play in the future of wealth.