Extreme sports, expeditions and adventure activities are becoming increasingly popular among high-achieving professionals – and not necessarily for the reasons you’d expect. 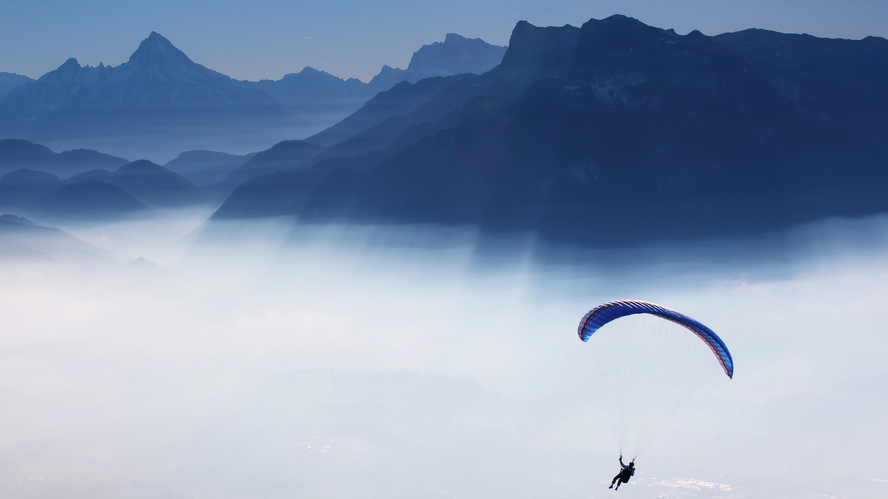 Back in the day, if you wanted to find financial services professionals enjoying some downtime, you’d look on the golf course. In 2018, though, these high achievers are just as likely to unwind by snowboarding, surfing, climbing mountains or jumping out of a plane – or perhaps flying one. A survey carried out in 2017 by the telephone answering service Moneypenny found that 50 per cent of senior executives and 48 per cent of self-employed people (and 78 per cent of self-employed men) have participated in extreme sports, the most popular being sky diving, surfing, gliding, bungee jumping and abseiling.

On the surface, it might seem obvious what attracts individuals whose professional lives revolve around the management of risk to such high-risk activities, and why high earners choose sports and expeditions that require significant financial outlay. But in reality, their motives go beyond conspicuous consumption, thrill-seeking and competitiveness.

“Extreme sports are not necessarily synonymous with risk and participation may not be about risk-taking. Participants report deep inner transformations that influence world views and meaningfulness, feelings of coming home and authentic integration as well as freedom beyond the everyday,” wrote Eric Brymer, Reader at the Institute of Sport, Physical Activity and Leisure at Leeds Beckett University, in Phenomenology and the Extreme Sport Experience.

Choose your own adventure
It’s a view that chimes with the experience of Sandy Loder, founder of the performance consultancy Peak Dynamics, which focuses on improving human performance, judgement decision-making and leadership effectiveness through a range of extreme adventures. Many of Loder’s clients are the next generation of ultra-high-net-worth families, who face unique challenges as they prepare to lead their family businesses.

“We know that successful entrepreneurs are able to make good decisions under pressure,” Loder says. “But can the next generation do the same? Often, their privileged upbringing has left them with low self-esteem and sometimes more serious issues such as substance abuse. We focus on developing self-reliance, resilience, leadership and communication, and extreme environments help with that.”

These extreme environments might be an Arctic dog-sledding expedition, covering 300km in five days. “The trip is self-contained,” Loder says. “All the food for the people and the 70 dogs is carried in the sleds, and we stay overnight in huts. The dogs need to be looked after: fed three or four times a day and given water. It requires you to work as a team. Loners cause friction.”

Loder emphasises the analogy between the life-and-death decisions made on an expedition and those made in the boardroom. “Over the period of an expedition, the quality of decision-making deteriorates as a result of tiredness and over-investment,” he says. “Likewise, someone heavily invested in a project will ignore red flags and believe their own press, carrying on when they should turn back.”

High flyer
Valentin Vincendon, Dolfin’s Head of Product Development, is no stranger to such life-and-death decision-making. He has held a glider licence since 2013 and a private pilot’s licence since 2014, and is profoundly aware that not only his own but his passengers’ lives are at stake when he takes to the air.

“Flying has had a big impact on me professionally and on the way I make decisions,” he says. “Having had other people’s lives in my hands when I assess situations has increased my ability to take tough decisions so as to follow my best judgement against external friction such as not offending people, avoiding conflict, or covering one’s back by following the norm (and blaming the ‘usual procedure’ in case of failure). When you’re interacting with people at work, you have to be poised and think things through; flying a plane means interacting with airports and flight control as well as with your passengers, and taking quick decisions.”

But these decisions aren’t made by embracing risk. In fact, Vincendon says, removing as much risk as possible from the situation is central to safety and success.

“When I studied behavioural economics, I learned that one of the biggest biases for traders and hedge fund managers – especially men – is a tendency to be over-confident,” he says. “There is a reinforcement bias in that when you do something, your brain will try and justify it. So if you’re in a position where you’re going down and down, your brain will make you maintain that your first judgement was right simply because you decided so at the time and you will keep going even though you should consider your wrong initial behaviour as a sunk cost. But when you’re flying and going through bad weather, you clearly can’t afford this kind of thinking and you’re going to stop and turn back if you think you’re taking a stupid risk.”

To mitigate risk, pilots – along with surgeons and other professionals whose smallest error can prove lethal – rely heavily on methodical planning and checklists, Vincendon explains. “You have to go through everything before take-off and before landing. If people get over-confident and neglect vital checks, they could kill themselves. All extreme sports are the same in this way – paragliding, climbing, scuba diving – they all use checklists as a way of assessing risk. When you invest money, your checklist takes you through all the little things that could ruin your high-level analysis. It sounds boring, but it means you’re safe to do what you love and what you’re good at. It frees your mind so you can trust your instincts and sleep well at night.”