Lunch with Dolfin: Ibukun Adebayo on Africa, a continent of contrasts

When Ibukun Adebayo, co-head of emerging markets at the London Stock Exchange Group, met Dolfin CEO Denis Nagy for lunch, the food was rooted in Tuscany but the conversation wandered from investment opportunities in India, through improving the efficiency and transparency of capital markets in Africa, to using technology to solve the “settlement conundrum”.
27 March 2017 / Lifestyle 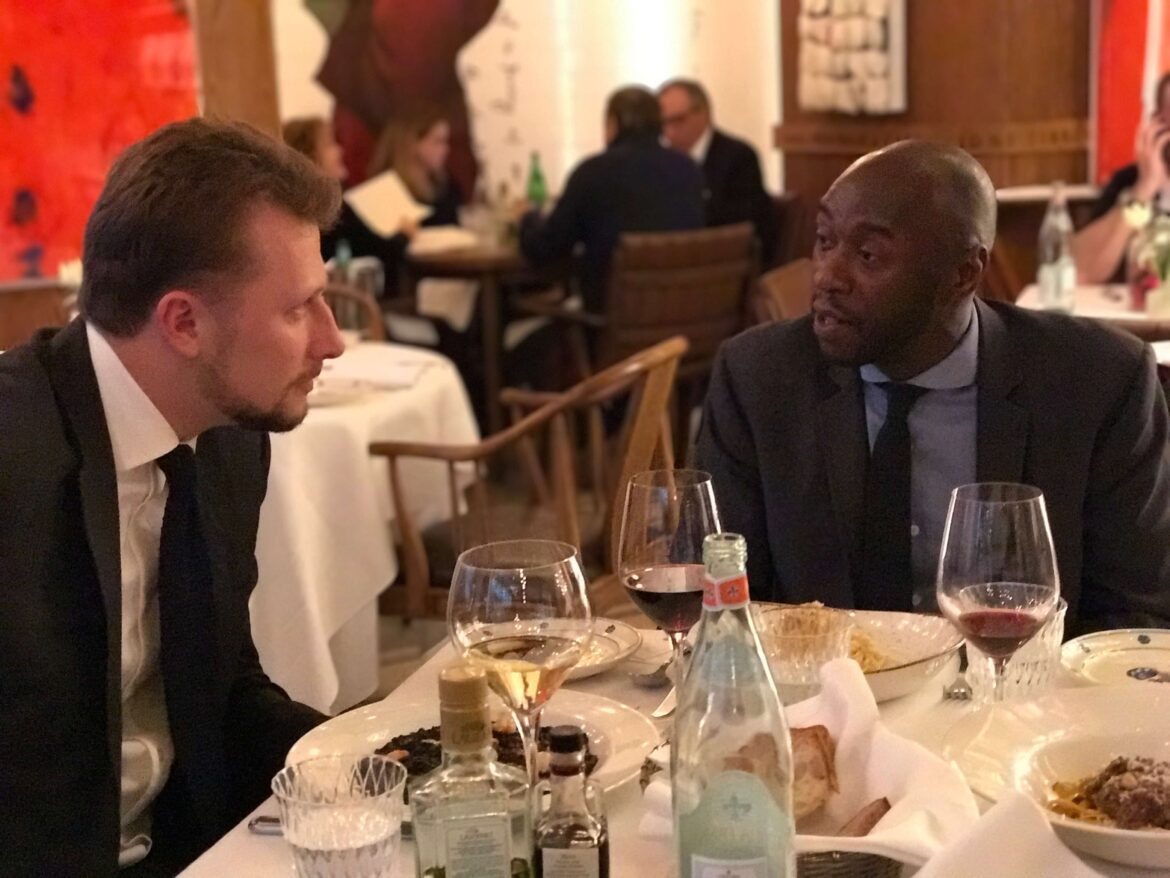 Since the Frescobaldis, one of Italy’s oldest and most respected wine dynasties, opened their eponymous London restaurant in 2014, it has established itself as a reliable oasis of Tuscan hospitality, nestled in a quiet, narrow street off Savile Row. It’s so nestled, in fact, that Ibukun Adebayo, the London Stock Exchange Group’s affable co-head of emerging markets, is struggling to find it. And this is causing no end of stress to our maître d’. “I’m just worried about you, I want you to have time for a wonderful lunch,” he frets while Dolfin’s CEO, Denis Nagy, is sanguine – perfectly content nibbling on the soft focaccia and thin crispbread while taking in the wood-panelled room with its vast, hand-painted tile murals.

It’s not long before Adebayo joins Nagy and the two plunge enthusiastically into introductions. Nagy’s passion for the “financial services boutique for financial professionals”, he’s been building for a couple of years gets the better of him and he volunteers the Dolfin story first. “Everyone’s obsessed with going digital but few in the wealth and asset management business are really prepared; we have a solution,” he says before catching himself and asking Adebayo about himself.

Relaxed and erudite, Adebayo is an easy man to warm to. He’s been with the LSEG’s emerging markets strategy team for more than a decade. “I ran the Exchange’s listing business for the first nine of those,” he says. “I was responsible for encouraging emerging market companies to come and raise capital in London – whether it be equity or debt – by listing on the exchange.” That role took him across the sub-continent, to India and Pakistan.

More recently, Adebayo has been working on complex challenges in the Middle-East and Africa. “Linking the markets is a big theme for all exchanges at the moment,” he says. “We’ve been working on building joint settlement platforms. Ultimately it’s about how to reduce settlement and transaction costs for investors. How do you create ‘global’ shares?”

Adebayo is clearly passionate about the work LSEG is doing. “My family is from Nigeria, so I have a personal interest,” he says. “In Africa, we are being much more strategic. Instead of just getting companies to come and list in London, we’re helping to build capacity locally, across the continent, developing stock exchanges there.”

Opportunities abound but are not necessarily obvious. Adebayo offers the example of Kenya. “It has a huge Muslim population. Wouldn’t it make sense to develop an Islamic finance product in the local market? And then we can bring London liquidity to that opportunity.” Morocco is another case in point: “there is a huge focus there on renewable energy. Couldn’t we create a mandate for the certification of green bonds?”

With thoughts of Africa still in our minds, we’re yanked momentarily back to Tuscany by our first course. A small army of polished waiters arrives to deliver carpaccio. The beef fillet, served with parmesan and black truffle, is a beautifully balanced, luxurious treat. The tuna and its stowaway avocado and orange suffers somewhat in comparison.

“Did you know that in the 19th century, the LSE issued a bond for a country that didn’t exist?” Nagy teases, but he has a serious point to make. “Nowadays, there is no risk of that but we are sometimes confronted with situations where there’s a shortage of reliable information. We looked at a high-risk, high-return bond from Angola recently and there was no public information to research. Is that experience common?”

Whether sparked by the citrus overbearing the fish in our starters or Nagy’s question, there’s a hint of a wince as Adebayo nods his head. “Yes, it can be a challenge to access the right information, and it’s important to conduct thorough due diligence.”

Adebayo segues swiftly to one of his broader themes: “Africa is a continent of contrasts,” he declares. “People shouldn’t talk about Africa as a collective; it’s a set of regions, a series of very different countries – each with distinct characteristics and peculiarities.”

“Absolutely,” agrees Nagy who cites the research PWC put out last year on digital disruption in Africa. “Only 12 per cent of the population has access to financial services in Nigeria. Then you have countries like Zambia or Cameroon where it’s around 40 per cent and, at the other end of the spectrum, 82 per cent in Mauritius.”

“So, in such a complex continent,” asks Nagy, “how do you identify the investment opportunities that make sense?”

“There’s such an extensive diversity in terms of opportunities, but even those are sometimes contradictory,” replies Adebayo. “For example, in Nigeria there’s been a lot of emphasis on building the oil industry. Meanwhile, Ghana – another West African powerhouse – has taken a different approach and is systematically developing everything other than oil.”

“Olive oil?” asks one of the legion of smiling waiters. He hasn’t stumbled clumsily into our conversation; he’s asking if there is anything he can do to improve the main courses that have arrived. There isn’t. Adebayo’s crab linguine and Nagy’s squid ink risotto are both perfectly executed and warmly received but even they can’t match the veal cheek pappardelle – superb, warming comfort food for this grey February lunchtime.

After a sip of his Pomino Benefizio Chardonnay, Nagy asks about the LSEG’s ambitions in Africa. “We recognise that you have to have markets that are fit for purposes for issuers, rather than the other way around,” Adebayo says. “We create markets that allow issuers to issue in the local currencies, with local reporting standards.”

“One of the exciting things about Africa is the lack of legacy systems.”

Nagy is keen to explore the role technology should play. “One of the exciting things about Africa is the lack of legacy systems, which frees you to leapfrog to the latest tech. To what extent do you see evidence of that in areas like clearing and settlement? Will distributed ledger systems like Blockchain deliver on their promise?”

“The stock exchanges all take it very, very seriously,” says Adebayo. “We have to. LSEG’s LCH business is the world’s largest clearing house; we clear approximately 90% of the world’s OTC interest rate derivatives.”

It transpires that LSEG has established a team in Seattle specifically to look at how Blockchain can help solve what Adebayo calls “the settlement conundrum”.

“A pan-African settlement platform is a great idea but needs significant expertise and development. And of course, there’s the issue of sovereignty – who owns it?”

As dessert menus are waved away and espressos ordered, Nagy asks about the risks of investing in Africa – risks that Adebayo is keen to put into context. “I don’t see it as being particularly risky, certainly not when you compare it to some emerging markets. It has some increasingly stable democracies.”

“How do you get large pension funds to put money into building a pipeline somewhere down in the Niger delta? It’s a combination of government acknowledgement that there’s an infrastructure problem and their ability to provide guarantees or use their reserves to provide guarantees – or use local debt capital markets or equities markets to bring forth a solution. The infrastructure gap is in the region of 80-90 billion USD a year. It’s not a small chunk of change.” Nagy concurs. “Africa is one of the few regions in the world where the rewards exceed those offered by other high-risk opportunities in other regions. The economic value created is often obvious and immediate,” he says.

On 31 March the LSEG is launching Companies to Inspire Africa, a collection of high-growth private companies doing “amazing things in Africa”, according to Adebayo. “Over the last two years, we’ve been collecting details on hundreds of companies across sectors. To qualify, these companies need to be properly audited. What we’ve done is create the first database of identifiable investment opportunities.”

The data will be available online. “Africa has no equivalent of the UK’s Companies House,” he says. “So we’re creating a list of fast-growing, dynamic businesses. The companies raise their profile, the private equity guys get a chance to showcase the success of their investment, the investors get access to intelligence that would otherwise not exist.

As the two return to their offices, one thing is clear: LSEG’s projects – like the Frescobaldi wine making dynasty’s foray into restaurants – are proof that businesses that are hundreds of years old can still have hundreds more ahead of them, provided they are built on solid foundations, brave enough to look for opportunities beyond the core and bold enough to adapt to the future.