More than 1,800 people – from CEOs of global financial institutions to the founders of the world’s most disruptive technology start-ups – met at MoneyConf 2017 in Madrid this month to “redefine the future of finance”. Dolfin’s CMO, Andrew Carrier, reports from the conference. 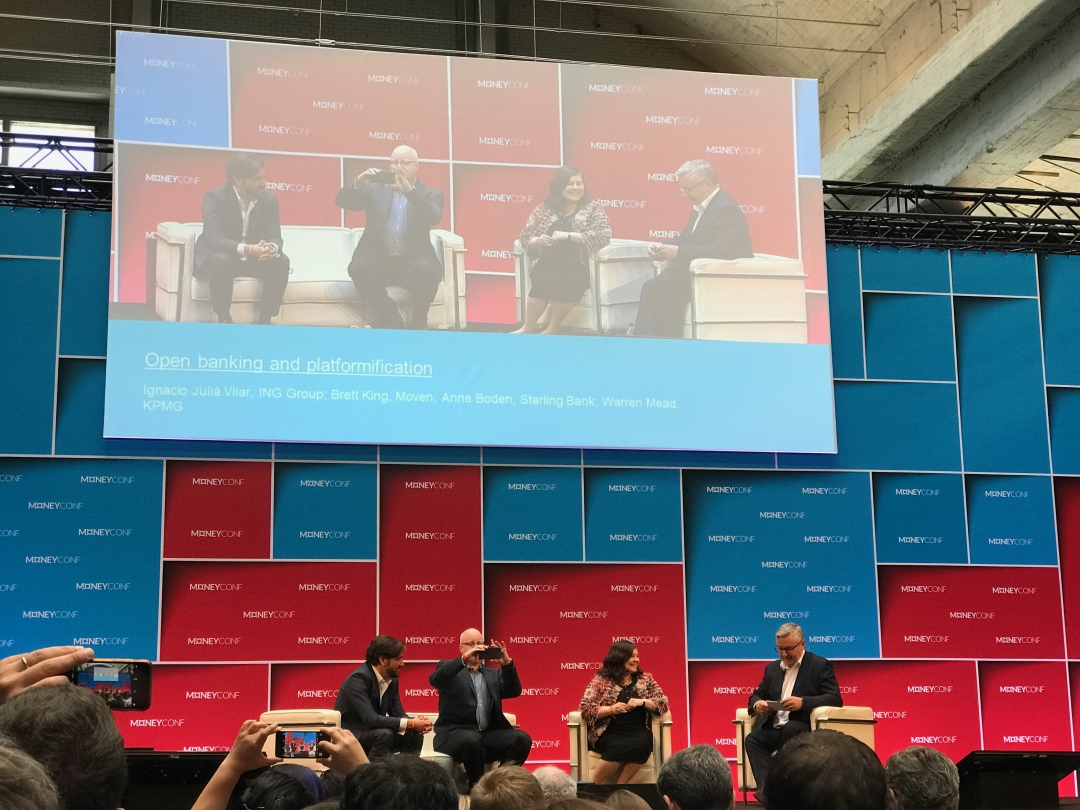 In my takeaways from the one-day WIRED Money conference, I concluded that the future of financial services was “about people, not products; relationships based on trust, not lock-in; and using technology to surprise and delight customers”. MoneyConf, a three-day event hosted by the organisers of Web Summit, provided an opportunity to delve deeper into these ideas. The consensus was that success lies in building trust by being completely transparent and offering a platform that delivers a truly great customer experience.

Before focusing on transparency and platforms, I’d be remiss not to touch on Brexit, distributed ledger technology and artificial intelligence. All three continue to be major drivers in the debate about the future of finance. They’re huge, potentially disruptive topics that evoke risk and opportunity in equal measure.

The Brexit discussion at MoneyConf was notable for how the fintech community thinks in terms of cities not nations. “The competition isn’t between countries but financial centres. The mayors of these cities have great powers,” remarked Consult Hyperion’s Director of Innovation, David Birch. His view was echoed by Transferwise’s CEO, Taavet Hinrikus, who believes there is “a huge fight on for FinTech capital of the world”.

The stage hosted a slew of Blockchain fans. Almost every speaker who mentioned the technology was wildly enthusiastic about its application. eToro’s CEO, Yoni Assia, was unequivocal, claiming: “Blockchain and bitcoin is as significant a technology as electricity, computers and the internet.”

Why does it matter? For Joanne Hannaford, Head of Technology, EMEA, at Goldman Sachs, the answer is simple: it’s “a huge opportunity for the openness and collaboration finance needs”. And the good news is that we won’t have to wait to see it happen, either. “We will see some distributed ledger technologies deployed this year that will create an impact,” asserted David Rutter, Managing Partner at R3.

Roman Stanek, CEO of GoodData, was the first of many speakers to remind the audience to start harnessing artificial intelligence. “The race is on: from ‘mobile first’ to ‘AI first’,” he said. Brett King, founder of Moven, was perhaps the most explicit, saying: “Humans don’t add value in a real-time experiential world.” But it was left to Neal Cross, Chief Innovation Officer for DBS, Singapore’s largest bank, to explain why this really matters: “AI is going to change the customers we have to serve. That’s the fundamental shift.”

In short: Brexit might yet cause London to lose its ‘fintech capital of the world’ crown; Blockchain has enormous potential we’re only just starting to tap; and artificial intelligence won’t just make our lives easier but change the very expectations we have of our financial services providers. But none of that matters without first securing a client’s trust.

In the digital age, how can financial firms regain the trust their pre-financial-crisis forebears took for granted?

Step one is to think in human terms – about your customer rather than your profits. Cross said: “Most affluent wealth is managed by people. People want to deal with people.” Hinrikus took this idea a step further. “The reason we’ve been successful is that we’re focused on consumers. Banks were built for the benefit of bankers,” he said. “The number one reason that TransferWise exists is lack of transparency. We were sick of banks lying to us.”

Transparency is key to success for investing, says Northern Trust survey
An independent survey of 200 asset managers and institutional investors, conducted in February 2017 by the Economist Intelligence Unit (EIU) and sponsored by Northern Trust, reveals that transparency leads all investment considerations and has grown in importance since the 2008 financial crisis. Respondents indicated the higher level of scrutiny applies to both traditional and alternative investments, such as hedge funds, private equity, infrastructure, real estate and natural resources.

So, trust is earned when customers feel they are being served by real people with their customers’ interests at heart, people who will be honest and open with them. That’s straightforward to achieve if you’re a private banker enjoying regular face-to-face meetings with your clients, but how do you create that bond when most of the interaction you have is via digital channels?

For BBVA’s Global Head of Customer Solutions, Derek White, “trust is about time and transparency”, not necessarily interacting in person. He said that BBVA’s customers spend between 15 and 20 hours a year using their digital channels and emphasised that, because it regards digital as integral to its business, BBVA no longer has a dedicated digital unit. “Truly digital companies are digital below and above the glass,” he said. This was music to Hinrikus’s ears since, earlier in the day, he’d proclaimed that: “The only bank branch that matters is the one we carry in our pockets.”

The message from MoneyConf is loud and clear: trust depends on being forthcoming with information and easy to interact with, whether in person or – more likely – online. “If banks figure out transparency and user experience they might reinvent themselves. But many won’t make it,” warned Hinrikus.

The immediate threat – at least in retail banking – is from more agile fintechs with the nous to facilitate transparency. In Europe, they will be enabled by regulation. “The big thing now in Europe is PSD2 [the Payment Services Directive 2],” explained Samir Desai, founder and CEO of Funding Circle. “Banks will have to provide open API access to current accounts.”

The rise of the platform

Financial institutions that want to survive will be forced – either by commercial imperative or regulation – to be transparent. But which ones will thrive? For MoneyConf speakers, the answer is those that embrace the platform model.

Anne Boden, industry veteran and CEO of challenger bank Starling, accepts that technology companies such as Apple and Google are likely to encroach ever more on the customer ‘front end’, with banks relegated to providing products and doing the ‘back end’. “We can’t prevent that happening,” she admitted. But she’s optimistic: “In the future, we will have platforms where people will get the best products from the best providers.” White concurred: “Gone are the days when a bank can make a product and distribute it via a close channel.”

By now, though, most firms have read the platform memo. The real question is not whether or not to build a platform but how to differentiate it. King has long been a proponent of giving customers the right experience. “The problem with banks is they think always in terms of iterating the branch model,” he said. “We’re now in the experience era of banking.”

This last point may well have been the key takeaway from MoneyConf for me. Being transparent and offering a platform may not yet be commonplace, but most are working towards it. To thrive, to rise above the crowd, providers will have to not only offer a great digital interface but – more important even than that – have the organisational and operational agility to meet and anticipate their clients’ changing needs.

Will these transparent platforms that deliver a great experience get built? Will they have the impact on finance that the MoneyConf speakers envision? Well, I know of at least one that is coming to the wealth management sector soon. And, just in case you’re not entirely swayed by a biased marketing head of a financial services group with tech-powered plans, let me leave the final word to King: “We’re seeing $20–30bn a year of investment in fintech. Change is inevitable. By 2025, the biggest financial institution won’t be a bank, it will be a technology company.”