Last August, a 14-strong team from Dolfin set out to attempt the Three Peaks Challenge. The experience was transformative for them as individuals and as a group. 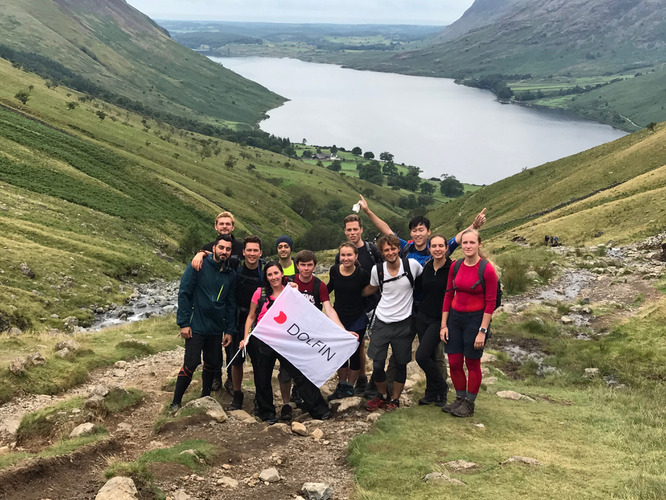 Early on the morning of Saturday 4 August, 14 Dolfin staff members met at Euston station to board the train from London to Glasgow. It was the beginning of a journey that would take them across three countries, up three mountains, and would raise in excess of £10,000 for the Muscle Help Foundation.

Amir Nabi, Dolfin’s Chief Operating Officer, recalls how the trip came about. “Giles Cheney, Head of our China Desk, had this great idea of coming up with a team event to raise money for this great cause. We wanted to use it as an opportunity to work very closely with each other, collaborate and set ourselves a challenge that would be, as we found out, quite a difficult one.”

“The combination of gruelling exercise, absolutely breathtaking views and wonderful company made it into such a transformative experience for me. I’ll have very good and strong memories of it for a very long time,” says Aliya Sayakhova, Business Development Manager.

The scale of the challenge became apparent on the descent from the first peak, when injury and poor weather put the team behind schedule.

“We had a few injuries during the trip,” says Dolfin intern Michelle Li. “But everyone was super helpful in making sure we all got to the bottom – if not the top! I was cold and everything was wet. I felt like I had a bucket of water in my shoes. But in those hardest times, my colleagues were supportive.”

Giles recounts how the challenge progressed. “We started driving to England at one o’clock in the morning and arrived in the Lake District just after six o’clock, about three hours behind schedule. We thought a good idea would be to just go halfway up, take some photographs and come back down again. We were then close to being back on schedule.

“We got to Snowdon about four o’clock, and nine of the 14 of us who had begun the challenge started climbing the final peak. The sun was shining, everyone was in good spirits and we all made it to the top in good time. We hoped we could make the descent even faster, but we hadn’t anticipated the delays that injury would cause. In reality, we got back at one o’clock in the morning.”

Although the team didn’t complete the challenge within the stipulated 24 hours, they all agree that it was a success on other, more important levels.

Mikhail Trebunskikh, Equity Portfolio Manager, says: “For me, it really was a good team-building exercise – not like ordinary team-building exercises, which people don’t like because they don’t understand why they are forced to do these stupid things! It breaks down the walls between people; once you find common ground it’s much easier to speak with colleagues.”

Maksat Stamakunov, Financial Analyst, agrees. “The best thing about this challenge was that we got to know each other better and actually felt like a family, not just like colleagues.”

For many of the team, the challenge helped uncover reserves of tenacity they were previously unaware they had.

Asja Vovk, Operations Assistant, says: “It was tough, it was more challenging than I expected. But now I’m definitely sure I can do more in life. You just discover skills inside your mind and body and realise you can do more than you think. It was unforgettable and I’m ready to do it again!”

“It shows you that you can achieve more than you think, because every time you think you can’t do anymore, you still push yourself to reach the peak. You just keep on,” says Daria Averina, Business Development Manager.

Their feelings are shared by Tatiana Shishkina, Analyst, who says: “During the challenge I learnt that I was stronger than I thought. I was really surprised that I could go up two peaks without stopping. I pushed myself to go up and reach the top and I feel very proud of myself. Now I feel much more confident.”

Returning to work on Tuesday, the team was ready to share not only the memories of the experience, but the lessons they had learned from it, with their colleagues.

Amir says: “It was a huge relief to be back and a great sense of achievement, not just personally but more for the team. We all felt pleased that everyone else in the office was proud of us for achieving what we set out to do – there was a very positive, happy feeling on both sides when we returned to work.”

Although completing all three peaks within 24 hours remains a challenge for another day, Giles feels that the most important objective was more than achieved. “One of our objectives was team building and working together, and although we sacrificed successfully completing the challenge, it really showed how we pulled together to help each other out and performed as a team.”